Crime Stoppers uses a three part approach to preventing and solving crimes.  The first part of the program is to empower the community by providing a safe way to report criminal activity.  Second, Crime Stoppers partners with all forms of media in the Oklahoma City area to inform the community how to anonymously report crimes.  Law enforcement is the final part of the triangle.  They follow up on tips from community members.

Calls are received at our local Crime Stoppers office.  Callers are not identified and conversations are not recorded.  The Crime Stoppers Coordinator (SSgt. Jennifer Wardlow) receives the information, completes the information form, makes initial inquiries and then passes the information to the investigating officer/detective.  Calls come in in response to recent news stories or social media posts where the police department has requested assistance identifying suspects, reported drug houses or other problem locations citizens may be concerned about or any number of crimes of which the caller may have knowledge.

By guaranteeing a caller’s anonymity, Crime Stoppers allows the caller to provide information in a safe environment without fear of retribution.  By offering cash rewards for information that leads to charges being filed or an arrest being made, the program encourages otherwise reluctant callers to provide vital information.

Tipsters now have the option of giving us tips online through www.okccrimetips.com.  The process is completely secure and anonymous and is a very effective and efficient means of safely communicating with us in today’s world.  Our WebTip process is powered by the world’s leading online tip solution provider Anderson Software. 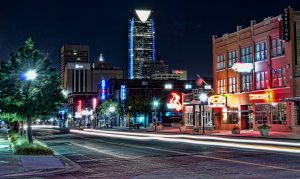 Structure and Funding of Crime Stoppers

The Crime Stoppers program is funded by private donations and fundraising.  NO TAX DOLLARS ARE INVOLVED.  The reward money paid out by the program is from the fundraising and donations collected from concerned citizens and businesses.

A community board of directors, made up of persons throughout the Oklahoma City metro area, meets on a monthly basis to evaluate arrests and decide on the amount of rewards to be paid…up to $1,000.  Rewards are then distributed to tipsters through an anonymous and secure process.  Although tipsters are eligible for rewards up to $1,000, many callers choose not to collect their reward.

The answer is quite simply yes.  Since the start of Oklahoma City Crime Stoppers, many calls have been received resulting in thousands of arrests made and millions in property recovered and drugs seized.  Calls have included information about wanted fugitives, murders, robberies, rapes, assaults, drug sales and firearm offenses.

The success of a Crime Stoppers program cannot be purely based on statistics alone.  Numerous other benefits have been derived to include:

Crime Stoppers is here to stay.  It has been accepted by police as a valid and highly effective investigative tool.  The public, through its overwhelming response, also appears to have accepted it as a more palatable alternative to traditional methods of providing information.

Say Something.
Make a Difference