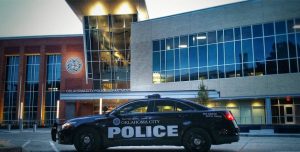 When you call or email Crime Stoppers of Oklahoma City, your tip is taken/processed by an officer with the Oklahoma City Police Department.  OCPD has a unformed force of 1169 officers and 300 civilian employees.  The department has a central police headquarters (pictured above), and five substations covering over 2,500 police reporting districts averaging 1/4 mile in size.  The Oklahoma City Police Department is responsible for protecting and responding to calls within almost 700 square miles.

In addition to officers patrolling the city in cars and on foot, the Police Department includes an Investigations Bureau, a Bike Patrol Unit, and Airport Police Unit, a Helicopter Unit, a Motorcycle Unit, a K-9 Unit and a Lake Patrol Section.  The department operates the City’s Emergency Management and 9-1-1 programs.  The department also has a Crime Scene Investigations Unit to collect and preserve evidence, with a state-of-the-art Forensic Lab, Drug Lab and DNA lab to process evidence.

Say Something.
Make a Difference